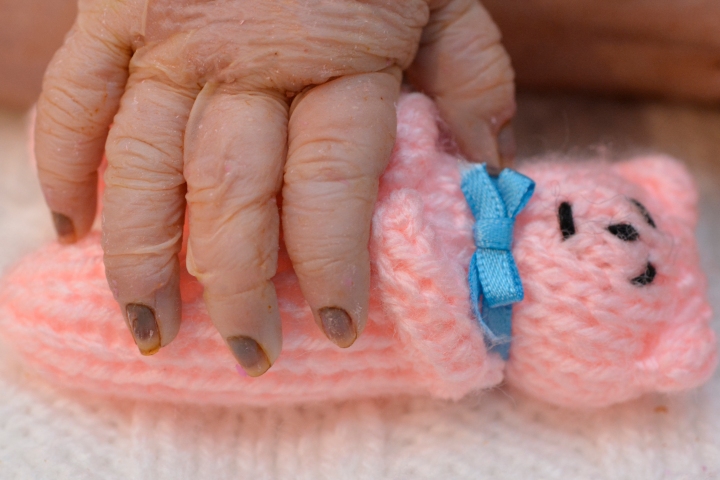 When I woke up on the day of Mavy’s Post-mortem results I was filled with dread. I wondered what outcome would be ‘best’. When I was asked how I felt about receiving the results, I would shake it off by saying that nothing would change the horrible fact that she wasn’t in my arms, so it would make no difference. This couldn’t have been further from the truth.

I needed to know what had happened to my beautiful girl. I had to understand.

The meeting was over zoom – due to Covid-19 – with our Bereavement Midwife and a Consultant. I cannot describe how it felt staring at a screen waiting to find out why my daughter died. I felt like my heart was being ripped from my chest. In my mind I was transported back into that delivery room, feeling the worst I have ever felt in my life.

The Consultant began to deliver the results. The signal was so poor it only added to the stress, I was straining to hear every word because every single word was so important to me. The beginning of this conversation was more about what was not wrong with Mavy. No infection, no chromosome issues, no genetic problems.

I have been careful not to write about anything too ‘medical’, as I am not a doctor and I don’t want to write something that’s factually incorrect. What I write is my understanding of what has happened, based on speaking with medical professionals. Considering this I have copied out what the post-mortem report said below:

“The post-mortem findings are those of a normally formed female fetus…. There is evidence of acute stress response, in keeping with acute hypoxia.

Underlying causation of these changes is difficult to define with certainty. The post-mortem findings include a well grown cherubic fetus. In the context of previous gestational diabetes (not in this pregnancy), fetal growth and placental histology raise the possibility of sub clinical maternal gestational diabetes”

The cause of death was Acute Hypoxia – in other words Mavy died from lack of Oxygen. The placenta was small in comparison to Mavy which raises the possibility I had undiagnosed gestational diabetes, causing Mavy to outgrow the organ supplying her oxygen.

It was discovered from a blood sample taken after delivering Mavy that I was diabetic. Due to previous gestational diabetes with my daughter Nola I was given two blood tests throughout my pregnancy with Mavy. Both results came back clear. Usually, the NHS test for diabetes in pregnant women by carrying out a glucose test. For those of you who have never had this test it goes like this:

This test was replaced with a simple blood test due to Covid-19. The blood test I received measured my sugar levels at the time the blood was taken. The threshold was 42 and I have now learnt my result was 38 – so under the limit to be diagnosed with gestational diabetes.

I’m now left with a lot of questions:

There were times towards the end of my pregnancy I felt faint and very ill. I had to eat or drink something straight away to feel better. I have no medical proof, but I do now believe I was suffering with hypoglycaemia as a result of the diabetes. I thought I was experiencing normal pregnancy symptoms, but research has led me to this conclusion.

When I was pregnant with Nola, I had read on the NHS website that diabetes could cause Stillbirth (although very rare). I was controlling my diabetes well with diet, so I did not ponder too much over this. My limited understanding was that a baby could grow too big because of the disease and I assumed this would mean an issue with birthing the baby. I now understand that the danger is the baby will overtake the placenta and not be receiving enough oxygen or nutrients. I feel strongly now that women need to be aware of the worst-case scenario. Yes, it is scary but unfortunately it is realism and the more knowledge we have, the more aware we can be of our bodies and our babies.

Since receiving the post-mortem report, I have carried those 12 pages around with me everywhere. I have sobbed while sitting with a medical dictionary, figuring out all the tests and poking and prodding they did to Mavy’s little body. It has broken my heart into a million pieces. This is me continuing to be her parent, trying to understand, trying to make some sense of why my daughter isn’t here. I owe this to her.

The most difficult part to get my head around in all of this is that yes, I have a series of factors that could have contributed to her death. But that’s all they are, factors. There are no definite answers. What we do now know for sure is I had diabetes and Mavy died from lack of Oxygen. Linking these together is logical but I’ve been told it cannot be proved.

The care I received is being investigated by the HSIB (Healthcare Safety Investigation Branch) and I trust they will uncover any gaps if there are any. I don’t want this to be anyone’s fault. However, I can’t shake this horrible feeling that when Covid-19 hit us, somebody sat in a boardroom and decided to change that diabetes test – resulting in Mavy’s death.

The reality is, if Mavy had been born hours before she was, she would have been born a healthy baby girl. I am trying to learn to forgive myself for not being aware of what was going on in my own body. To a certain extent I don’t think I ever will.

I apologise this one may be a tough read; it was a tough one to write. There are so many what ifs, but that is the reality of a bereaved parent of a Stillborn baby. We very rarely get definitive answers.

Sending love to all those loss parents and the friends and family who support them.